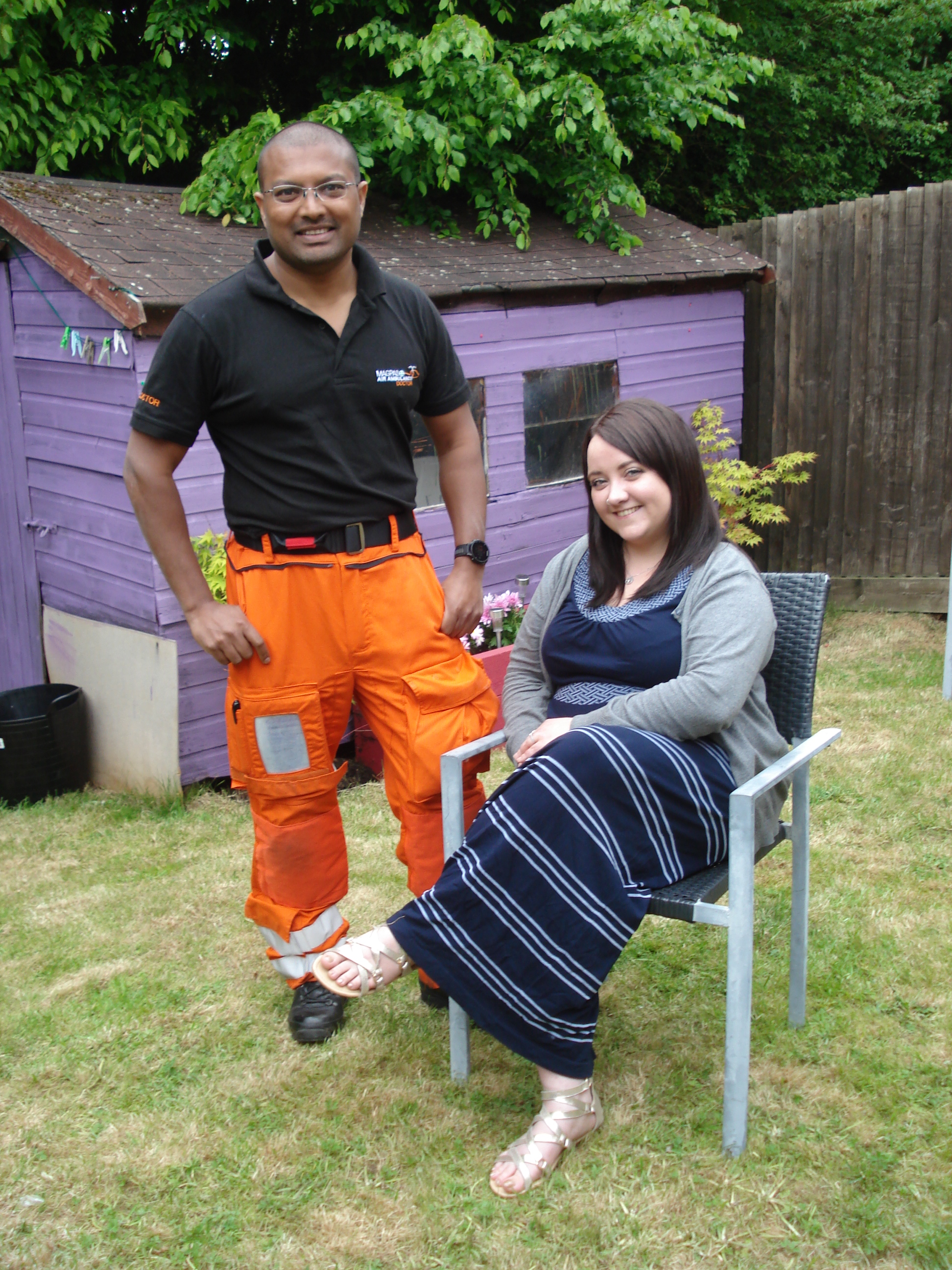 PHOTO CAPTION: Rebecca meets Magpas Dr Rupert Hurry for the first time since the balloon crash on 22nd May 2016

When 22 year old Rebecca Fry (who was living in Norwich at the time) took off in a hot air balloon on a beautiful summers morning in May last year, she felt exhilarated and ready to take in the stunning Northamptonshire scenery on high. The last thing Rebecca expected was the horrific, agonising and life-threatening incident that awaited her.

It was the first flight of the season on the Sunday 22nd May 2016, and Rebecca was floating over Earls Barton alongside eight other hot air balloons. It was around 7:30am, she was smiling and taking a selfie to capture the moment, when she noticed the balloon was getting dangerously close to some power lines. She just managed to get herself into the brace position against the back of the basket, as the balloon hit and pushed up against the power lines. Suddenly, there was a huge flash of light, sparks flew and she felt a shuddering electric shock (around 33,000 volts) pulsate through her body. “I felt as if my neck was going to snap and I remember screaming through clenched teeth,” Rebecca explains.

Within seconds, the basket was on fire; the intense heat of which caused the balloon to shoot up over 100 feet and carry on rising. Rebecca fell to the bottom of the basket. It was at this point her body became numb and she couldn’t feel her right arm and right leg at all. Having pulled herself up, a blistering wave of heat rippled through her, she looked down to see flames licking at her legs and she lost consciousness.

The balloon then burnt away, leaving the basket to freefall, plummeting to the ground. Whilst she was still on fire, a traumatised Rebecca crawled out of the basket and tried to run. She reached for her face and head and started to absorb the full horror of the situation, as her entire fringe came off in her badly burnt hands. “It felt like my legs were sizzling and cooking and I could feel my leggings melting into my legs” she explains.

When the EMAS Ambulance service arrived, Rebecca was losing huge amounts of fluid as her body started to shut down. “The paramedics put a gel pad on my face to protect my facial burns which quite possibly stopped my face from becoming permanently damaged” she relays. The ambulance crew did what they could but realised the severity of Rebecca’s injuries meant she needed specialist knowledge – and fast. When the Magpas Air Ambulance enhanced doctor and paramedic team arrived, Rebecca was in an enormous amount of pain and desperately needed more fluid. Magpas Dr Rupert Hurry and Paramedic Alex Pearce fought hard to get an IV line into her arm (as her body continued to shut down).

The Magpas highly trained medics rolled Rebecca onto a stretcher, soothing her with their reassuring words. She says, “I suddenly felt safe in their hands…I was terrified I was going to die. But I knew I had the best chance of survival thanks to the Magpas Air Ambulance medical team.”

Rebecca was then flown to Birmingham Hospital (the specialist burns unit), where she spent four weeks in the burns centre critical care unit. It’s been a long and gruelling recovery process for her, which is still ongoing, but Rebecca is now ready to tell her story. “I want to thank Magpas Air Ambulance for everything they did for me. Without Magpas, I might have died. I owe my life to them.”

Rebecca’s close family and her boyfriend, Brett, were at Rebecca’s bedside every day to comfort her. After promising to put a ring on her finger as soon as her left hand healed, Brett proposed to Rebecca on New Year’s Eve last year. “I’m so lucky to have family and friends around me who truly care. People say you’ve been so brave, but I just had to keep going, I didn’t have a choice.”

Rebecca points out, “I understand what it’s like to be terrified and be in hideous pain. It can a horribly lonely time. After what I’ve been through, and am still going through, I want to reach out to other people who are experiencing terrible, traumatic times. I want to give them hope and tell them that they will get through it, to hang on in there and believe that life will get better – just as it has done for me.”

To mark almost one year since the crash, Rebecca met and thanked Magpas Doctor Rupert Hurry who flew to her aid. The brave young woman also shared her story with the media, to help raise awareness about the crucial lifesaving care Magpas Air Ambulance delivers, by land and air, in the East of England and beyond.

We would like to thank Rebecca for her courage and dedication to the cause.