Heartfelt thanks from Magpas former patient 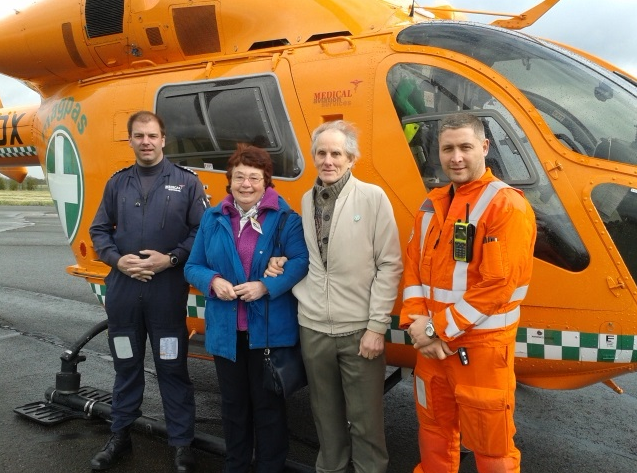 Former patient David Nicholas recently paid a visit to the Magpas Helimedix Base to say a special thank you to Magpas Paramedic Chris Hawkins, for helping to save his life.

In February last year, Wisbech resident David was being driven to the doctors by his wife Janet after he complained of feeling unwell. It was in the car on route to the doctors that David took a turn for the worse; he went into a cardiac arrest.

Paramedic Chris and Doctor David Driver were the Helimedix Team on shift that day, they flew to Wisbech in the Magpas Helimedix Air Ambulance to help David, who was at that point fighting for his life in his car.

When the helicopter landed, a member of public was there to meet the Helimedix Team and drive them down the road to where David was. Fortunately, an EEAST Ambulance Crew had already successfully revived David when the Magpas Team arrived.  The Helimedix were then able to provide enhanced A&E care for David, putting him into a medically induced coma to protect his brain and reduce the impact of the cardiac arrest.

The fantastic lifesaving news is that David has since made a full recovery. As soon as he was able, he made great efforts to get in contact with everybody who helped him that day, to thank them for their part in saving his life.

Whilst he was at the Magpas Helimedix Operations Base, David said, “I am over the moon to have met Chris and the Team, it’s been fantastic! The lifesaving work Magpas does is vital.”

He added, “I wear my Magpas badge every day since the Helimedix Team helped save me, to help spread the word about their amazing service.”