A Royal launch for our new airbase appeal

Magpas Air Ambulance launched their Future 50 Appeal to fund a new airbase at the Jockey Club Rooms, Newmarket this Monday 20th September – in the presence of their Royal Patron of the Appeal, HRH The Princess Royal.

The charity, which this year celebrates 50 years of saving lives, has been at its current airbase since 2005, operating initially from just one room of the building. Today, Magpas Air Ambulance has a team of over 50 Doctors and Critical Care Paramedics operating a 24/7 service by air and road and has been outgrowing the building for a number of years.

Magpas Air Ambulance has to relocate from its current airbase as the land has been sold for development. However, this also provided them with the opportunity to not only build a bespoke new airbase fit for 24/7 operations, but also relocate to a site located closer to the region’s major trunk roads with the aim of reducing dispatch times be road by a crucial 15 minutes.

The charity has already raised over half of the £7 million project and received planning permission for the new base, located at Alconbury Weald in 2020. However The Future 50 Appeal needs to raise the remaining £3 million to complete the build which is due to be operational by March 2023.

As well as aiming to improve response times by up to 15 minutes due to improved proximity to major roads, the new Magpas Air Ambulance airbase will have a dedicated training centre to train the next generation of the region’s pre-hospital emergency Doctors and Paramedics, be equipped for 24/7 operations with well-being and rest facilities for crew and clinicians, as well as community and patient facilities on site. The new base will be more efficient by co-locating the charity’s operations and support staff, reducing charity overheads and improving environmental impact.

The Future 50 Appeal is being led by the Magpas Air Ambulance Chairman John Bridge OBE. Taking up the role as Chairman in the summer, this is the first major initiative for John in his role at Magpas and something he is very passionate about. John explains, “Over many years, I have witnessed the Magpas Air Ambulance flying through our skies to provide lifesaving care to someone whose life hangs in the balance. I’m always mindful that this life could be someone I know or someone I care about very much or I myself might one day need their service. Magpas Air Ambulance provides vital care for our community that we have been fortunate to have benefitted from for the past 50 years. I am immensely proud to be the Chairman of Magpas Air Ambulance at such an important time for the charity, as well continuing to lead the appeal to build a new bespoke airbase creating the foundation for the organisation’s next 50 years.”

Magpas Air Ambulance hope this will be the first of several events over the next 12 months to attract the remaining funding needed to complete the project.  However, the charity is careful not to divert income from running the day to day lifesaving service.  As Daryl Brown, MBE the Chief Executive of the charity explains, “We are extremely fortunate to receive fantastic support from the communities in which we work. As a charity, our service relies on donations from our supporters and the public to continue to operate and save lives 24/7. For this reason we will be looking for alternative and new sources of funding for the Future 50 Appeal”

He continues, “The launch event on Monday was a fantastic occasion and Magpas Air Ambulance were honoured our Royal Patron could hear more about our plans for the new airbase in person. We look forward to welcoming all our supporters to the new base in what we hope will be the not so distant future.”

Magpas Air Ambulance is charity and relies on donations to continue saving lives. If you can, please donate at donate.magpas.org.uk 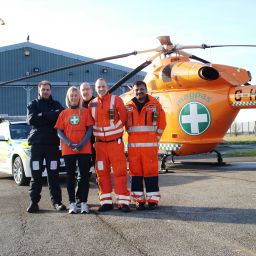