At 4.31pm yesterday afternoon (17th) Magpas Doctors Andy Lindsay and Maria Smith and Paramedic Alex Pearce landed in Wisbech via the Magpas Air Ambulance. They had been called to treat two patients who had been injured in a collision between a motorcycle and a car.

The Magpas enhanced medical team assessed a man (in his 30’s) who had sustained multiple injuries. They provided the patient with advanced pain relief at the scene (giving him A&E level care) before Doctor Lindsay accompanied him by land ambulance to Queen Elizabeth Hospital, Kings Lynn. He was in a stable condition upon arrival.

The Magpas Doctor and Paramedic team assessed a second patient (also in his 30’s) who had sustained chest injuries. They gave him advanced pain relief (providing him with A&E level care at the scene) and Doctor Smith and Paramedic Alex Pearce accompanied the man to Queen Elizabeth Hospital, Kings Lynn, via land ambulance. He was in a stable condition upon arrival. 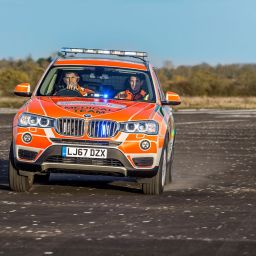