At 4.14pm on Thursday afternoon (14th), Magpas Doctors Leigh Bissett and Dhakshinamoorthy Vijayasankar and Paramedic Dan Phillips landed near Oundle, via the Magpas Air Ambulance, to treat a number of people injured when the bus they were travelling in collided with a car.

Magpas Air Ambulance was one of the first emergency medical resources on scene and assisted an EMAS ambulance officer to assess the situation and declare a major incident. Other emergency services, including the Warwickshire & Northamptonshire Air Ambulance, arrived shortly after.

As the first air ambulance team on scene, the Magpas medical team took the crucial role of triaging the injured patients.

Excellent working between all agencies ensured 23 patients were quickly triaged, with many treated at the scene and several taken to hospital by land ambulance. One patient was airlifted by the Warwickshire & Northamptonshire Air Ambulance.

We have no further information at this time. 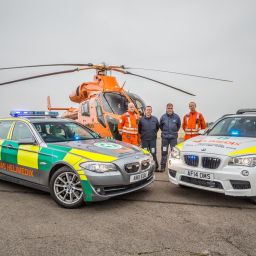