Magpas Air Ambulance were called to serious road traffic collision between a car and a minibus on the B1040 near Woodhurst on Thursday 14th November. Magpas Doctor Saad Jawaid, Critical Care Paramedic Steve Chambers and Doctor Simon Lewis arrived via a Magpas Air Ambulance rapid response vehicle at 5:10pm, they were the first medical resource on scene.

The Magpas Air Ambulance medical team declared it a critical incident. They worked alongside the Cambridgeshire Fire and Rescue Service to extricate and assess the patients, and utilized their specialist knowledge and skills to help manage the impact of the serious collision.

Approx. 20 people were injured in the collision and were transported to Addenbrooke’s Hospital or Hinchingbrooke Hospital via land ambulance. 1 patient was sadly pronounced dead at the scene, our thoughts are with their family and friends at this time, and with all those involved in last nights incident.

Anyone who witnessed the collision, or has any information, is asked to contact the road policing unit on 101 quoting incident number 365 of 15 November or visit www.cambs.police.uk/report 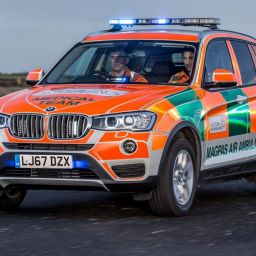