At 12:25pm this afternoon, Magpas Helimedix (Doctor David Driver and Paramedic Paul Sallis) landed between Junction 13 and 14 of the M1, in the Magpas Helimedix Air Ambulance – after a road traffic collision involving two lorries. A man (in his 30’s) was seriously trapped inside one of the vehicles.

The Magpas team sedated the patient and then worked alongside Fire & Rescue Crews, an EEAST Ambulance Crew and the Police to remove him safely from the truck. The Helimedix then accompanied the man in a Land Ambulance to Milton Keynes Hospital. On arrival at the hospital, he was in a stable condition.

Magpas Paramedic Paul Sallis said, “We wish our patient a swift recovery. Considering the severe nature of the incident, this man is fortunate not to have suffered any life-threatening injuries”.

The Helicopter team who flew the Helimedix to the scene was: Pilot Richard Eastwood and Crew Member Andy Craigie.

An EEAST Ambulance Officer was also present. All the Emergency Services worked extremely well together. 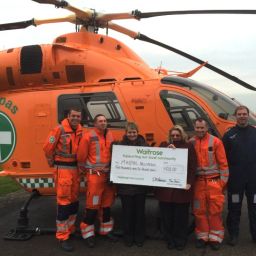 Continued support from Waitrose in Newmarket 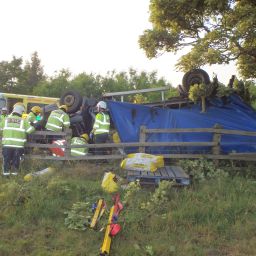