At 1:36pm (19th), Magpas Helimedix (Doctor Nick Scott and Paramedic Alex Pearce) arrived close to the A1, near Peterborough, via the Magpas Helimedix Rapid Response BMW – after two people suffered a fall from a large motorbike.

The Magpas team administered enhanced pain relief for a man (in his 60’s) who endured severe injuries to his upper body, before escorting the patient to Peterborough City Hospital in a land ambulance (monitoring him all the way). On arrival at the hospital, the man was in a serious but stable condition.

The Magpas team also assessed a woman (in her 60’s) who suffered minor injuries to her chest. This patient was subsequently taken to Peterborough City Hospital, in a stable condition, in a land ambulance.

Two EEAST Ambulance Crews, an EEAST Rapid Response Paramedic, an EMAS Paramedic and the Police were also present. All the Emergency Services worked extremely well together.

Wittering woman thrown from horse – Magpas Helimedix fly to her 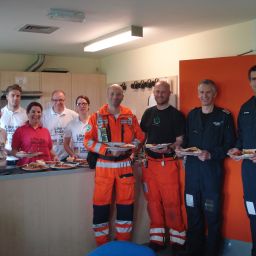