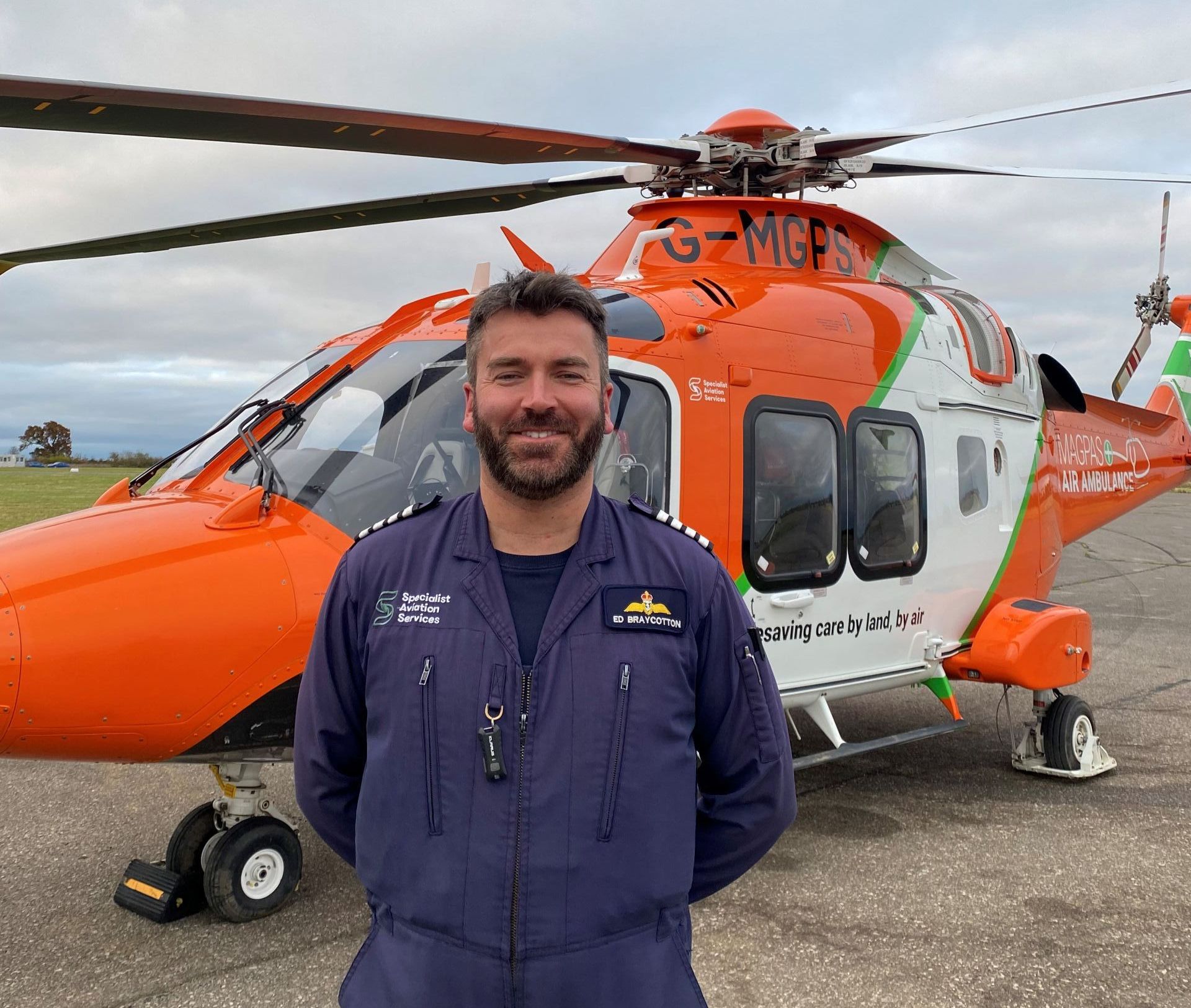 39-year-old Captain Ed Braycotton knew he wanted to be a pilot from a young age. He explains, “I went to an airshow at a navy base when I was 12 years old and got to see the helicopters there. In all honesty, I just thought they were really cool and knew I wanted to fly one of those! I worked my way towards that goal all through school, joined the Royal Navy after university and trained for three years to become a pilot.”

After 9 years with the Royal Navy, Ed went into the world of corporate VIP charters, flying A-list celebrities, public figures and business people across the UK and Europe.

However, Ed continues, “The dream was always to fly HEMS (a Helicopter Emergency Medical Service) and so when an opportunity to join Specialist Aviation Services came up to be a Touring Pilot for the country’s air ambulance charities, I didn’t think twice!”

As a Touring Pilot, Ed would travel to different air ambulance services when they needed a pilot to cover a vacant shift. He worked with around 7 air ambulance charities in total, appreciating the variety of the work he did and flying across huge parts of the UK. But living out of hotels was becoming a drag and after spending a lot of time with Magpas Air Ambulance, helping to keep them operating 24/7, Ed made the decision to join the charity as one of their full-time pilots.

Ed explains, “Having a permanent base and working alongside such highly skilled clinicians who I have a great rapport with is great. Plus, the area is such a nice patch to fly around! And when I think of the positive impact Magpas Air Ambulance brings to so many people across Cambridgeshire, Bedfordshire and the East of England it makes me proud to work with the service.”

“As we fly what is effectively a hospital emergency department to patients suffering life-threatening emergencies, the job can be very high pressured – particularly at this time of year as we’re now battling adverse weather, flying in the dark in night vision goggles and landing at brand new sites in pitch black. But as a HEMS pilot you go through very specialised training and have lots of procedures, checks and briefings in place so when that emergency call comes in we’re a slick operation and able to get to our patients as quickly and safely as possible.”

Once on scene, the pilot’s job doesn’t stop there either. The Magpas Air Ambulance pilots and Technical Crew Members watch over the aircraft, as general public often come over to see it and find out more about the air ambulance and the charity. They’ll also be communicating with the medical team and bringing them any extra equipment they may need to help treat their patient, and helping if they need to be airlifted to hospital – which requires lots of rapid decision making regarding the closest and most appropriate hospital, fuel calculations, if they can accommodate a loved one to fly with them, weather conditions at their destination and so on. It really is a whole team effort.

This year, Ed will form part of the Magpas Air Ambulance team working on Christmas Day. Spending time away from his family to bring lifesaving care to those who need it and keep other families together. He says, “Our operations and the care we can provide is no different on Christmas Day to any other day of the year, we’ll still be providing around the clock emergency medicine – although we do try to squeeze in a crew Christmas dinner too. If we’re really lucky we’ll get to eat it hot! If that phone rings though and there’s a patient who needs our help, we drop everything and will salvage what we can in the microwave later!”

Can you help Ed and the rest of the Magpas Air Ambulance team continue to fly this Christmas? Donate today and help save lives in Cambridgeshire and beyond.