Boobs and Brass to host concert in aid of Magpas Air Ambulance! 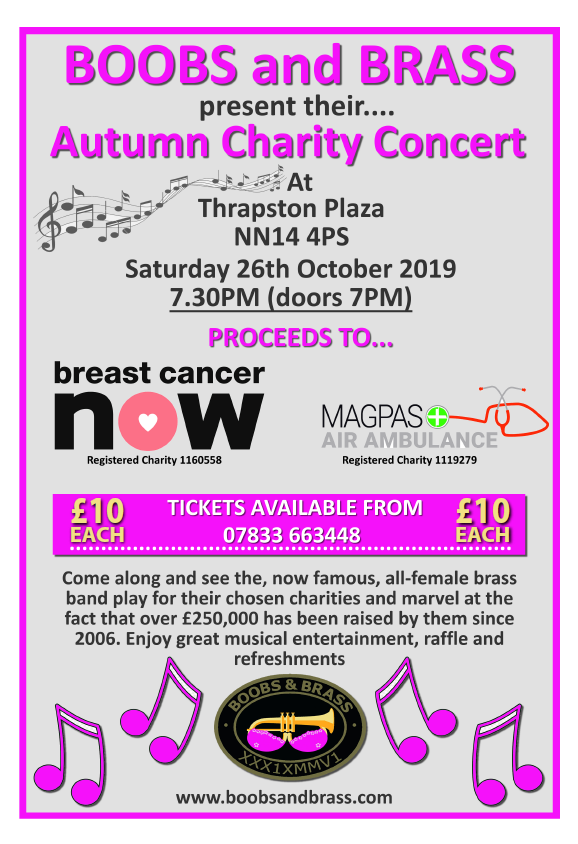 On Saturday 26th October 2019, Boobs & Brass will be hosting their Autumn charity concert in aid of Magpas Air Ambulance at Plaza Hall in Thrapston, NN14.

Margaret Betts, one of the organisers, has a special place in her heart for Magpas after we went out to save her Great Nephew, George, earlier this year. George said Thank Ewe to Magpas in his own way earlier this year by auctioning off a sheep with all proceeds being donated to Magpas.

Recently, Margaret got in touch with us and said she wanted to say thank you to Magpas in her own way. Here’s her story:

In 2006, two friends – Jane and Margaret – who both play the cornet in a brass band, sat talking over a cup of tea when Jane revealed it had always been a dream of hers to form an “all ladies” band but had only ever got round to “thinking” about it. Margaret decided it was time Jane did something about it and volunteered to help her. Within six weeks they had enough volunteers to form the brass band and to perform a concert and it was decided that any proceeds from this concert would be donated to charity.

Today, Boobs and Brass are a UK wide band with over 700 women wanting to be part of the orchestra. They have previously mainly raised money for Breast Cancer Care, totalling up an impressive £220,000 for the charity in the last 20 years. They have also raised an additional £39,000 for other charities in that time.

Literally all the money raised from playing concerts goes to chosen charities with the ladies paying for everything (accommodation, venues etc) themselves. And this October they are raising money for 2 charities, including Magpas, and splitting the funds 50/50, hoping to raise £2,000 (so £1,000 each).