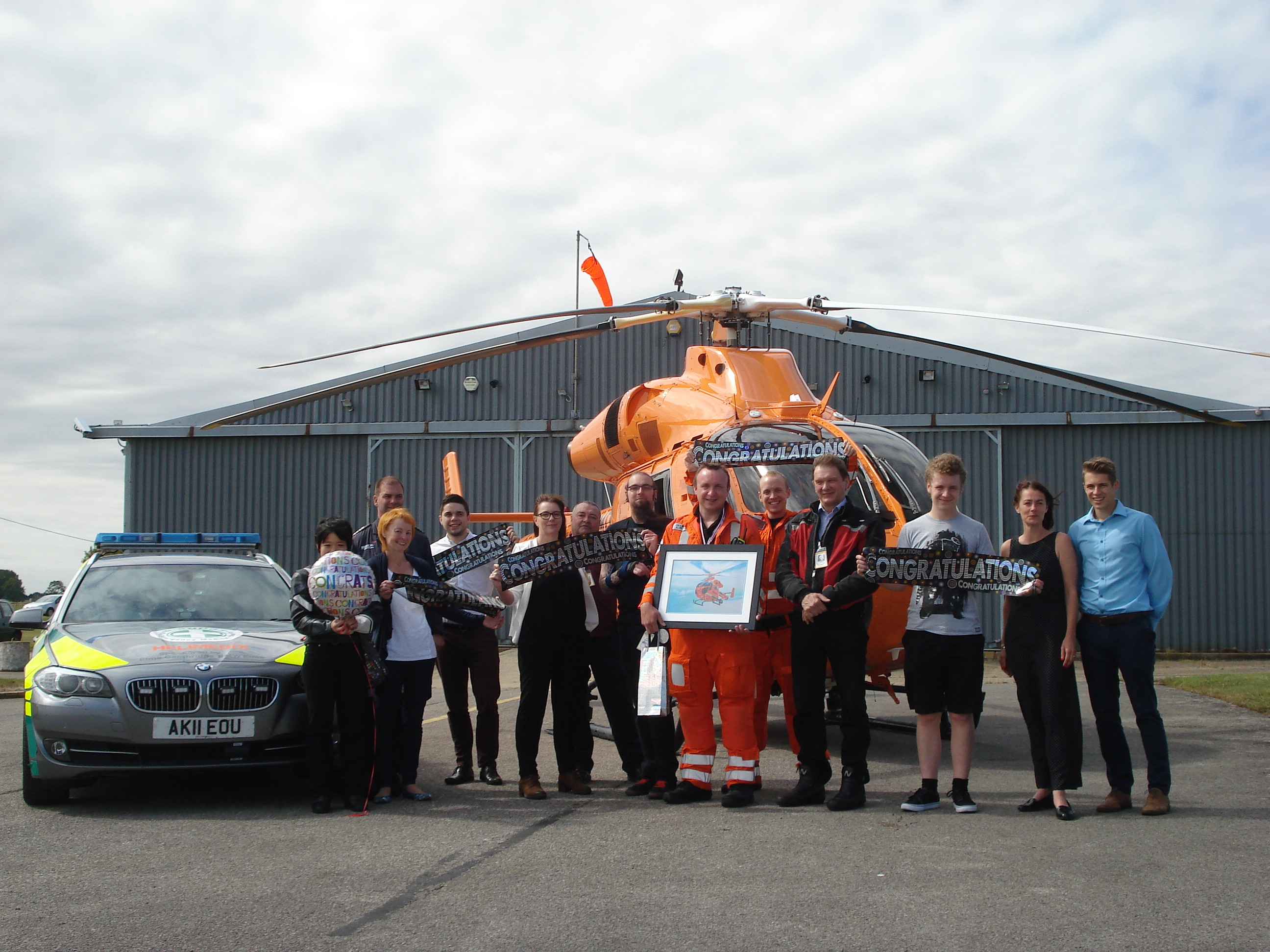 It’s not often you meet a man who has volunteered literally thousands of hours to make a vital difference at the frontline of hundreds of severe medical emergencies. Dr Simon Lewis has saved countless people in life-threatening situations across the East of England; and many of his patients are not even aware he has helped them in their ultimate time of need…and this is only the beginning of Dr Lewis’s achievements over the last 15 years.

On behalf of all the seriously ill and injured people Simon has treated at roadsides, city centres, sporting events, remote locations, school playgrounds or people’s homes – three former patients from Hertfordshire, Cambridgeshire and Suffolk came to meet him recently to say thank you and to congratulate him on his remarkable anniversary.

Starting off as volunteer doctor at Magpas, this incredibly modest but driven man soon became Clinical Director of the Community First Responder Scheme; training members of the local community to treat patients going into cardiac arrest. Simon then went on to play an integral part in setting the standards of trauma care; training senior doctors and paramedics from all over the UK to bring the right model of care, within the right time frame, to severely ill and injured patients when they need it most. Now as the Medical Director of Magpas, Cambridge University Hospital ED consultant and East of England Regional Training Programme Director, his patients want to thank him for all that he has, and continues, to accomplish – whilst giving back to the people of this region and beyond.

One sunny morning earlier this month, 26 year old Chris Inns from Hitchin, together with his mum and step dad, met Dr Lewis for the first time since Chris suffered potentially fatal injuries when he was involved in a motorbike and car collision in 2012. The impact of the incident threw Chris up in the air, landing some distance down the road, where he sustained skull, neck and pelvic fractures along with severe leg, arm and hand injuries. Dr Lewis and Helimedix Paramedic Dan Cody, gave Chris the advanced care he needed there and then, before taking him to Addenbrooke’s. Chris has since made a fantastic recovery and is getting ready to go to University.

Chris was joined by 64 year old Paul Woodgate and his wife from Hemingford Grey. Paul is also lucky to be alive. He was on his motorbike on a cold and icy A14 when the bike veered out of control on the slip road corner at Fenstanton. Paul flew off the bike, did a double summersault and hit a fence; leaving him with multiple fractures in his arm and almost all of his ribs (“nearly a whole rack” as Paul puts it), collapsed lungs and a lacerated spleen. Thanks to the trauma care given to him by Dr Lewis and Helimedix Paramedic Simon Standen that day, Paul came out of hospital 10 days later.

Last but not least, 17 year old Ben Haughton and his mother Ann drove over from near Bury St Edmunds to congratulate Simon. Ben has also made a full recovery after suffering serious injuries in 2013, when his push bike and a 4×4 collided at the bottom of a hill – he too was sedated at the scene and flown to Addenbrooke’s hospital by Dr Simon and his then Magpas Paramedic team member Adam Carr.

Chris explained how the day felt for him, “It’s been totally overwhelming to meet the person and the team who effectively saved my life and enabled me to make a great recovery. Magpas is a spectacular organisation, we should all promote and support it as much as possible”.

Paul went on to say, “It’s fantastic to see Simon and be here today. This is the first time I’ve met him since the incident. This guy saved my life and I got to say thank you. I’ll do whatever I can to help this charity”.

“I’m so grateful to Simon for all he has given to Magpas and all those he has helped – including myself. He and the Magpas team do an amazing job. You think these things will never happen to you, but if you’re ever in an emergency situation like I was, you’ll feel extremely lucky to have Magpas around to save you and get you back to a normal life again”, Ben pointed out.

Dr Simon Lewis summed things up by saying, “It’s incredibly moving to meet the people whose lives we’ve touched, it means so much knowing we have made a difference.

Magpas, as a whole, is a huge part of my life. It’s because of the all the people involved; all the Magpas supporters, my clinical colleagues, the charity support staff and the endless positive energy and enthusiasm that drives us on. At Magpas, we all want to give the highest quality of clinical care available to anybody that needs it, by air and by land.

We have created a culture that allows us to do that and continue to learn from our training. The organisation’s ethos is pretty unique and one that’s so forward thinking. Thank you to everyone who chooses us as their charity”.

Magpas receives no direct Government or National Lottery funding and relies wholly on generous donations from the public. You can support this incredible lifesaving charity by joining the Magpas Lottery or visiting www.magpas.org.uk. Thank you.